Having grown up before computers and the internet I am not sure if I am now engaged in the act of posting, blogging, texting or just twittering. Whatever it is that I am doing it is my intention to periodically use the “No One Asked Me …” section of the web-site to comment on sports-related issues that are relevant to the orthodox Jewish Community.

Players have always found the Thursday night practices difficult. The combination of mental and physical fatigue from a week of practice and study coupled with the knowledge that by 7:00PM on Thursday night their friends have already started their weekend, leaves the players with only one thought: ‘Let’s end practice early, so I can also get out of here.’

On Thursday night October 17, keenly aware of the Thursday night blahs, I blew my whistle fifteen minutes early, but before I could send the team off, Shlomo Weissberg asked if he could say something.  “Coach, the team has decided that each week we should end practice with a Dvar Torah[1] from a different player.”

The new Dvar Torah policy was followed religiously every Thursday night throughout pre-season practices but it would face its biggest challenge with the start of the regular season.

Despite our best efforts, on Thursday night November 17th we lost to Baruch 68-49. The players and coaches returned to the locker room frustrated and disappointed. After a few minutes of quiet reflection I gave a quick game analysis, offered  some words of encouragement and assuming that no one was giving a Dvar Torah after a loss stood up to offer my Good Shabbos send-off. Suddenly Benjy Ritholtz interrupted. “Coach, it is my turn to give the Thursday night Dvar Torah. I prepared two, one if we won and one if we lost.” “Give the one for winning,” I said, “Let’s end on a positive note.”

When Benjy finished I gave my belated Good Shabbos send off and went home marveling how the 2013-14 team would not allow anything, even the disappointment of a loss, to interfere with their desire to learn.

[1] A brief insight into Jewish thought which usually contains an inspirational or ethical message.  It is often based on the weekly Torah portion. 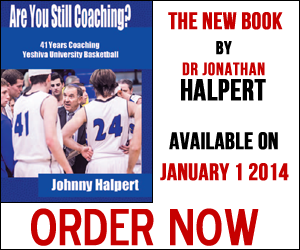